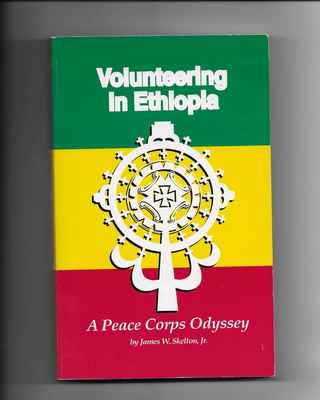 I was privileged to be a member of Group XIV, the fourteenth group of American Peace Corps Volunteers to serve in Ethiopia.
I joined the Peace Corps for many reasons. First and foremost, I was inspired by President Kennedy's challenge to do something for my country. I was also fascinated by the challenge, excitement and adventure that seemed to be inherent in the stated purposes of the Peace Corps. More significantly, I was searching for purpose and direction in my own life, and wanted to do something worthwhile, something I could believe in.
There were times during the application process in 1970 when I wondered whether I was engaging in some form of escapism. Some thought I was trying to escape from reality by going to some faraway place on some kind of far-out mission. Somehow, I knew that I needed to do something out of the ordinary in order to succeed in my search for purpose and direction. I believed in the ideals of the Peace Corps, and I grew to understand that my two years of service would give me the chance of a lifetime to help people help themselves while simultaneously reaping invaluable personal benefits.
I will always be grateful for the lifelong benefits I gained during my two years in Ethiopia: maturity, personal growth, and a perspective of the world that can only be accomplished through living and working in a foreign culture. The realization of such benefits was possible only as a result of being provided the opportunity to get to know the Ethiopian people and develop personal relationships with them.
No one has articulated such thoughts as well as a former Senator from Massachusetts, Paul E. Tsongas, who also served as a Volunteer in Ethiopia. His ideas appeared in the June, 1980 issue of "Reconnection." Senator Tsongas stated:
"...My two years as a Peace Corps Volunteer in a small Ethiopian town were a learning experience that surpassed any formal study before and after it. There I lived and learned with students whose lives had been vastly different from my own. I was a Peace Corps teacher, but I hope my Ethiopian friends know how much they taught me.
We had a very personal sense of depending on each other, so it was natural for us to know that nations also must depend on each other. Nothing before or after that time has shaped my view of the world so deeply.
The experience of service puts us in touch with problems on a human scale. Too often public policy is made in a bureaucratic dream-world. The real impact on people's lives is lost. But living in and learning about another's culture... brings understanding and an approach which embraces the human element. Volunteers do not forget their experiences.... They carry the experiences with them into future careers."
The experiences of Peace Corps service are not only carried into future careers, they often directly affect the very choice of a future career. That is true for many of the former members of Group XIV, who count among themselves foreign service workers, teachers, professors, lawyers, public health workers and social workers. This emphasis of what Senator Tsongas called "the human element" flourishes during Peace Corps service and represents the essence of the spirit of the Peace Corps.
This story is primarily about the members of Group XIV and their life in Ethiopia in the early 1970s as it could only be experienced through the Peace Corps. Such experiences provide a Volunteer's insight into the process of dealing with culture shock and personal rejection in a foreign country, as well as the joy of finding ways to make meaningful and fulfilling contributions.
I make no pretense of being either a professional anthropologist or sociologist. My role is simply to present the story as accurately as my own perceptions will allow, with infrequent references to published authorities for the purpose of substantiating certain facts. Otherwise, I have relied solely on my own recollections of the people and the places described.
The spelling of the many Amharic (the predominant language in Ethiopia) words contained herein is for the most part based on the phonetic English language spellings taught to the members of Group XIV by Ethiopian language instructors during in-country language training.
With these qualifications, this story is a part of Peace Corps history, a history that is replete with success stories ranging from the individual to the world scale. For thirty years, Peace Corps Volunteers have succeeded in fulfilling the first two stated purposes of the organization: promoting world peace and friendship, and helping people in developing countries meet their needs for trained manpower.
While I realize this story focuses on the lives of the Peace Corps Volunteers, I hope that, as part of the ever-growing body of literature about the Peace Corps, it will be a contributing factor in the process of the fulfillment of the third mandate of the Peace Corps: to give Americans a better understanding and appreciation of the peoples of the developing world.